Spreading salt manually may be possible for small paths and driveways. But if you’re dealing with an acre or more of an open space, spreading salt across the breadth and length that big isn’t a task you can complete manually in a first snowstorm. You need the best UTV / ATV salt spreader for the job.

Used together with plows, salt spreaders have become a significant part of winter road maintenance. Attached to compatible UTVs, these spreaders disperse salt to the road as you tow, and practically lowers water’s freezing point thereby hindering the formation of ice. With the chances of formation of ice reduced, major roads, driveways, and pavements become easily passable and therefore people friendly.

In this guide, we’ll take a look at some well-made, top-rated salts spreaders that you can buy. To be clear, a salt spreader doesn’t have to be expensive. It just has to be good enough to do its job.

Featuring a 12-feet spreading width, Field Tuff AS-125ATV12 Receiver Mount is the best spreader to consider fi you want to disperse salt on small driveways, medium-sized pavements, and large fields. Field Tuff builds this for flawless performance, so you end up spreading just enough salt with one quick pass. 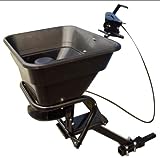 For starters, Field Tuff AS-125ATV12 Receiver Mount is a multipurpose unit. In addition to spreading seeds, it does spread out salt and sand quite well. Thanks to the integrated agitator, this unit will keep salt flowing freely as you continue to ride your UTV.

I’m willing to admit that the working mechanism is pretty much standard for the price point. The 12V motor, which can clock a salt dispersion speed of up to 570 RPM, means the spreader is incredibly so fast that it can spread salt in minutes.

The model includes a quick connect system, which makes it easy to mount on UTV. Thanks to this connection system, you can mount the spreader on just about any type of UTV without the need of an additional external connector or anything like that.

Convenience is a factor to consider when buying a salt spreader, so it’s good to see that Field Tuff account for it. To be precise, they’ve built the controls to be closer to the driver’s seat, allowing for more operational convenience, which you don’t get from model such as the Agri-Fab 130-Pound Tow-Behind UTV Broadcast Spreaders.

Brinly BS36BH is no doubt one of the well-built tow-behind broadcast spreaders currently in the market. You will love it because it’s a multipurpose, a unit that you can use to disperse anything, and salt in our particular case. 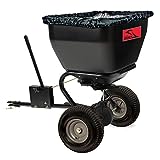 To begin with, Brinly BS36BH features a solid, durable design that can stand up to elements and continue performing fine. Primarily, it’s made of polyethylene, a material that’s both rust proof and corrosion resistant. It has a 175-pound hopper, making it one of the largest salt spreader that’s compatible with a UTV. Given such a large capacity, this spreader makes a good option for medium-sized and large yards, with a single fill being enough to cover a field as large as an acre.

It includes an agitator, which keeps the salt spreading as you ride the UTV. In addition, the accurate calibration allows you to ensure precise control of salt as you spread on driveways, pavements, and fields in the extremely arctic, snowy, and icy condition.

Even distribution of salt at a wider spread is possible with this spreader thanks to the inclusion of a directional spread pattern. And with a width spread of up to 12 feet wide, you can as easily disperse salt in a wider area within a short time.

Perhaps the strongest selling point of this broadcast salt spreader is the automatic stop. There’s an integrated patented technology that automatically stops spreading salt when you stop the UTV. This goes a long way to ensure you don’t waste material, not to mention make the entire unit is easy to use.

The UTVS16 is an all-purpose spreader that comes at a price point that isn’t that too steep. Given that it’s an all-in-one model, you can use it to distribute any flowing material. For example, it makes a perfect gardening tool, which you can use to spread seeds and fertilizer. It’s also recommended for spreading salt to lower the freezing point of water.

Built by a brand that has been in the machinery business since 1946, what you get for the price is a salt spreader created based on years of experiment innovation, and experience. From a design stand point the rust proof construction and versatile build makes UTVS16 an ideal salt spreader for the money.

There’s a 12V motor and an adjustable shut off gate that makes the spreader easy to manage. Add to this the 15-gallon poly hopper and you get a combo that can easily disperse salt on a large field. Moreover, UTVS16 has a spread width of up to 30 feet, making it an idea option to consider if you would like to cover a large area.

How to spread powdered lime on lawn

Field Tuff AS-80ATV12 was specifically for ATV when it first came to the market. However, the brand modified it later on, which means the current models can attach to a one and a quarter or two-inch UTV receivers. 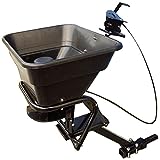 Field Tuff gives the design of its machinery the best attention that it deserves. The goal is to give you the best value for your money, and it’s good to see that they’ve given the Field Tuff AS-80ATV12 model the best design possible.

This model makes a good salt spreader mostly because of its heavy-duty construction and partly because of the convenient operation. The added on and off switch and the adjustable flow makes the unit easy to operate.

It includes a motor similar to the AS-125ATV12 model. Running on 12V standards at a maximum speed of 570 RPM, expect this unit to spread salt faster and more conveniently. You will also love this unit because it has a 12-foot broadcast width, which means you can spread out salt to a significantly large area within a short time.

The model features an agitator, which not only keeps salt in the hopper but also ensures even spread as you ride the UTV. Thanks to this agitator, the content in the hopper won’t easily clog the equipment.

Perhaps the biggest drawback that we’ve seen with this unit is the capacity of the hopper. It’s 80 pounds, about 45 pounds less than what you get from competing model. Even then, the lower capacity may be justified because the brand sells the model at a lower price point.

How to spread wood ash on lawn

1. Can you use a fertilizer spreader for a salt spreader?

Some fertilizer spreaders are also good for dispersing salt. But it’s important to check the manufacturer’s recommendation to make an informed decision.

Be quite keen on what they recommend the unit for, and if salt is not on the list, you are better off investing your money on something else.

2. Can you use a seed spreader to spread salt?

3. Which is better between a drop spreader and a broadcast spreader?

We recommend that you get a broadcast instead of a drop spreader. That’s because the former ensures every part you wish to cover gets an even coverage.

Now that you know what the best UTV / ATV salt spreaders are, what they do, and why they’re important, it should be easy to get one for yourself.

Scroll to Top
We use cookies to ensure that we give you the best experience on our website. If you continue to use this site we will assume that you are happy with it.Ok