Aeration is the process of improving the soil oxygen content while reducing compaction in your lawn. While core aeration involves pulling out soil cores to relieve compaction, liquid aeration is much subtler. Liquid aeration makes use of a compound that disperses clay soil, thus creating pores in the soil, which improves drainage.

But which one should you go for? When choosing liquid aeration vs core aeration, you need to consider a few things. In this article, we will guide you through liquid and core aeration and how to pick the best one for your lawn.

Both liquid aeration and core aeration solve the problem of compaction which is caused by traffic. However, they both involve different processes. Before we delve into their pros and cons, let’s first dissect each type of aeration.

What is Liquid Aeration?

When you hear of lawn aeration, what comes to mind? For most people, aeration sounds like pulling a special lawnmower that digs cores in the soil. But did you know that liquid aeration, which uses ammonium lauryl sulfate as the active ingredient, is just as adequate as core aeration?

Liquid aeration uses a unique solution that disperses clay particles in your lawn soil, creating channels for air and water to seep through.

To apply liquid aeration, mix the Lawnstar liquid aerator in water according to the provided ratio (on the packaging). Using a hose, spray the solution on your lawn and then water consistently for 14 to 20 days. 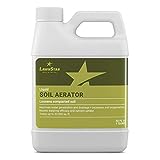 The liquid aerator also contains certain bacteria that help to break down thatch on your lawn.

Also read: How liquid aeration works and its effectiveness

What is Core aeration

Sometimes called plug aeration, this type of aeration involves using machines to pull out soil cores from the lawn physically. It is the most common form of aeration since results are visible almost immediately. There are different types of aerators depending on the size of your lawn, from small manual aerators to large tow-behind plug aerators.

Core aeration releases the compaction due to traffic, allowing your lawn to breathe. Core aerators utilize tines that dig about three inches into the soil. They then pull out the cores, dumping them onto the lawn.

Also read: How do you sharpen hollow tine aerators

After core aeration, your lawn will look ragged, but if done correctly, it will regenerate in no time.

Before digging out your soil cores, make sure to water your lawn adequately. Moisturized soil is more manageable to aerate than dry soil.

Pros and Cons of Liquid Aeration

Pros and Cons of Core Aeration

How Effective is Liquid Aeration?

In terms of effectiveness, liquid aeration has 100% coverage when sprayed on lawns. Since it is a liquid, as it flows deeper into the soil, the effects are more permanent. Liquid aeration builds up over time, providing a more long-lasting solution to soil compaction than core aeration.

How does liquid aeration hold over time? Are the solutions toxic to grass? These are a few worries homeowners have before buying a liquid aerator. However, liquid aerators don’t affect lawn in any way. In fact, they even improve the condition of your soil due to the different chemicals available in the mixture.

Can You Combine Liquid and Core Aeration?

First, liquid aeration can be done at any time of the year and has 100% coverage. This gives it the edge over core aeration, which can only be done before the rainy season, and lacks coverage.

So if you want to solve the problem of compaction and don’t want to spend on equipment, liquid aeration is the way to go.

Ultimately, the goal of aeration is to remove excessive thatch that hinders growth, to provide roots with oxygen and water for better growth, and to do away with surface runoff or standing water.

Whatever means you use to do that, either by liquid or core aeration, is up to you. However, the proven results from liquid aeration give it the edge over core aeration in terms of efficiency.

If you are aerating your lawn for the first time, it’s best to seek expert advice before taking action.