Grass-carrying wasp, also known as the grass wasp, is known for creating its nest using grass blades. Having a wasp nest in your grass can irritate you, especially on the front lawn. Their nuisance makes every homeowner search how to prevent grass carrying wasps.

What Are Grass Carrying Wasp?

Unlike other wasps, grass-carrying wasps make their nests above the ground. They are also not aggressive. They are common around July to August, a season when the flowers are blossoming.

These females raise their larvae in existing cavities in nests made of grass blades and tree crickets. It also serves as food for the larvae.

Since the grass-carrying wasps aren’t aggressive, they can’t even fight for their property. If your lawn has hollow plants or cavities, expect their nests in your lane.

How to Identify a Grass Carrying Wasp

Grass-carrying wasps are common in the spring season. This is when most of the colonies die, and the queen looks for a new habitat. Besides the grass, the nest might be in the garage, shed, or your home.

You might identify a nest but wonder which type of pest it is. But if you see dry glass blades on the nest, then the pest is the grass-carrying wasp. The nests are annoying, especially if it is too close to your home.

However, grass-carrying wasps don’t chill out in colonies, so there is nothing to worry about. They are harmless if you don’t get in their way.

Grass-carrying wasps have a black body that is approximately 1.8 cm long. Their wings are red/brown, white thorax covered with long hairs.

Grass carrying wasps helps grass and other plants in pollination. Anyone can tolerate them since they are well behaved provided they observe some distance from their home.

Therefore, if you wish to have them in your lawn or garden for natural benefit, you can attract them using nesting materials.

The most irritating thing about grass-carrying wasps is their habit of building nests in open places. This is unlike other wasps, which are usually aggressive.

They are harmless, but if threatened, they sting. You will agitate them a little to arouse their anger.

Grass-carrying wasps don’t care about living with humans unless they try to get rid of them. That is why they care less about living in places where you do many activities, like windows.

Since grass-carrying wasps always find weird places to place their habitats, you may be forced to eliminate them. Here are ways to prevent them from becoming a bother to your home and your yard:

The best way to prevent the grass-carrying wasp from building nests in your yard is by sealing their entry points. They also access the house.

Search for cracks in door frames and windows, open dampers, torn screens, and unsealed vents. Trace the path that the wasp takes. This process is suitable in the morning or at night since they are inside their nests.

2. Get rid of food sources

However, removing food sources is not a guarantee that the wasps will be gone for good. They trace food sources and can visit for the search after removing the food.

During summer, the grass-carrying wasps now focus on sweet foods. Fallen apples and unclosed cans with juice attract the wasps. Ensure you close cans and dispose of them in closed bins to avoid them.

Also, get rid of fallen fruits before they rot on the ground.

Avoid squashing and swashing any wasp you see around. Grass-carrying wasps and other wasps release a wasp attracting chemical when squashed. The best thing is letting it be before you host a crowd of them.

4. Be keen on your dressing

Flower petals attract grass-carrying wasps, so do dressing with bright colors. When you wear bright colors, you will be like a walking flower and invite all the wasps to your home.

Build a fake nest like bee free wasp deterrent to assume that wasp is living in your territory. It is a wasp’s nature not to build a nest near another wasp’s nest.

Other wasps will build their wasps at least some hundreds of feet away from the nest.

Herbs repel grass carrying wasps and other types. Plant aromatic herbs like spearmint, eucalyptus, citronella, thyme, or spearmint to keep them off.

Wasp traps vary in effectiveness depending on the target area. This is because wasps can travel considerable distances in search of food. For instance, a wasp can fly for 275 to 915 meters from its habitat. Therefore, wasp traps are effective in small areas.

Few grass-carrying wasps are seen during spring, so setting out the traps is the best time. The few evident wasps are convoy queens, which represent thousands of workers.

If you are not the DIY type, purchase some traps like the protecker wasp trap bee traps catcher for satisfactory results. 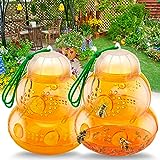 FAQs on how to repel grass carrying wasps

Grass-carrying wasps are harmless unless handled. They even don’t fight for their cocoons and nests.

Grass-carrying wasps don’t sting unless defending themselves. They only sting their prey like the tree cricket.

The grass-carrying wasp paralyzes tree crickets and lays eggs near or on them. The paralyzed prey becomes the larvae’s food. The generation is always one in a year.

What are grass bubbles?

We have seen ways to prevent grass-carrying wasps, but don’t be tempted to use pesticides. That’s a harsh and vital measure given that they are no aggressive wasps.

If you find a nest, you can remove it manually, whether in or not, since they don’t sting.