Floratam is distinguished by its longer and wider leaf blades. It has purple stalks making it distinct from other St. Augustine grasses. Floratam has a rougher texture and a blue, green tint rather than green. In addition, this grass species is characterized by white roots.

It is easy to mistake this grass species for other St. Augustine grasses. In this article, we will walk you through how to identify Floratam St Augustine grass

All St. Augustine grasses have similar features, but floratam grass is easy to tell apart. It’s crucial to understand the properties of Floratam grass so that you don’t confuse it with other species that look similar.

Floratam grass has wide blades, and the stems (stolons) have a purplish hue. Each grass blade has white roots and grows at least 3 inches apart. Compared to other St. Augustine grasses, floratam has longer grass blades.

Floratam has a coarse texture, and its roots are white in color. Floratam grass is a hybrid, so it does not produce viable seeds. Instead, you can plant it via sprigs, sod blocks, or plugs.

The SAD virus, like all viruses, is a tiny particle that lives inside the cells of St. Augustine grass and spreads through the plant. Inside the plant cell, the virus grows and spreads to other cells in the plant.

More and more of the plant’s cells become infected with the virus, making it weaker and more susceptible to other diseases and changes in the weather. Floratam can thus be used to control these viruses by crowding out the diseased grass.

But that’s not the only unique thing about it. Floratam is the most drought-resistant species of St. Augustine grasses and is the most widely used in Florida. It has a resistance to the sun’s heat as well as most lawn diseases.

Floratam is also resistant to brown patch fungus, downy mildew, and gray leaf spot. It also has a slightly higher resistance to chinch bugs than its parent.

In its initial years, Floratam grass had a high resistance to the southern chinch bug (Blissus insular is), which damages the leaves of grass. However, these pests evolved over time and can now attack Floratam grass.

Chinch bug damage can leave a floratam lawn looking ugly with brown patches and spots on leaves. So, make sure you employ proper control methods for chinch bugs as soon as you spot signs of the insects. They are more common when the weather is hot and dry and in areas of the lawn that do not receive enough water.

Floratam grass is fairly shade tolerant, so it can grow well under shade trees, provided it receives at least 6 hours of sunlight. It is highly susceptible to damage from traffic and can quickly turn brown if walked on continuously.

Floratam St.Augustine grass is a warm-season grass that does reasonably well in hot weather and is drought resistant. However, it is not cold tolerant, so it might die or go dormant in winter due to freeze damage.

Floratam grass grows fast during the warm summer months, so you might need to mow your lawn every other week to maintain a good height. Floratam St.Augustine can sprout a whooping ¾ inch in 24 hours if it is watered well.

A good point to note is Floratam has thick coarse grass blades, so you will need a sharp mower to get clean cuts. Using a dull blade will leave open cuts that are susceptible to infections.

Floratam grows into a dense turf that chokes out weeds, so you won’t have to worry about weeding your lawn.

Which Conditions Does Floratam thrive in?

Floratam is a warm-season turfgrass. During planting it requires intensive lawn care in the form of fertilizers and water for the first few months before it takes root.

Use a 3-1-2 fertilizer once a month until the grass is established, then repeat every 30 to 60 days in Fall. According to experts, water-soluble granules are the best form of fertilizer to use.

Once established, you should maintain it at the height of 2 to 3 inches tall. You should cut back on watering in preparation for the winter as it will require less water in the cold months.

You can also apply Winterizer Lawn Fertilizer to help the grass maintain its color. Reduce mowing in the winter and ensure the grass blades are at least 3 inches tall. 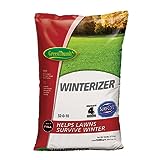 Floratam grass performs well in most soil types, including sandy, clay, and loam soils, and grows even in muddy environments. However, it is most adaptable to Florida soil.

Floratam’s root system likes soil that is a little acidic as it helps absorb nutrients and water. Its optimum pH level lies between 6.0 to 7.5. T.  Floratam can also withstand salty air from the sea.

When sprayed at temperatures above 85°F, Floratam grass is not tolerant to herbicides containing atrazine.

Now you know how to identify floratam st Augustine grass by its distinct blade size and purple runners(stolon), with an average internode length of 3 inches.

When buying floratam grass, make sure you inspect it thoroughly and compare it with other available species to ensure you’re getting the right one.

We use cookies to ensure that we give you the best experience on our website. If you continue to use this site we will assume that you are happy with it.Ok