He sat down next to me while I was drinking coffee on my patio, cleared his throat, and began, “Did you know that before lawnmowers were invented, lawns were solely for the wealthy?” I was astounded and couldn’t believe what my grandfather was telling me.

I am not a lawn geek like him, but I adore my lawn. So, I questioned him why he said no middle-class family could afford to waste such fine planting soil. He added that before the 1700s, grass mowing was so expensive that you needed an army of workers or cows to have your lawn manicured.

I was taken startled; imagine mowing your grass by hand; it must be excruciatingly unpleasant. I became curious about how did they mow lawns in the 1700s.

In the 1700s, the scythe was one of the most well-known equipments for cutting grass. Nowadays, no one uses this instrument, yet it was formerly lauded for keeping lawns healthy and cut.

A scythe is composed of a curved steel blade affixed to one end of a long wooden shaft known as a snath. The wood includes handles that let the user hold the snath upright while mowing and swing the blade horizontally at ground level.

For millennia, scythes have been used to cut grass. I had no idea how intimidating using a scythe was until I tried it on my lawn one day. My first experience was dreadful; the scythe was heavy, and the blade was dull even after honing with a sharpening stone.

I swung it with great effort, but I couldn’t establish the proper rhythm. I was continually shoveling a lot of dirt and occasionally cut the air. It was awful, and I gave up due to frustration.

In the 1700s, there were two types of scythes: North American style and European style. I must agree that none of them are particularly pleasurable to use, particularly if you are used to using a motorized lawnmower.

Even though the European scythe style is more aesthetically pleasing and lighter than the North American scythe style, both are laborious tools to operate; however, the scythe is still useful today; I use it to mow along stonewalls, mow turf beneath my fence, and in areas where big machinery cannot go.

This way of mowing lawns was good in the 1700s since it did not damage the environment with unpleasant gases, did not destroy your hearing, and was a cheap and inexpensive instrument compared to the huge gear we use today.

Today, a pair of shears are used to cut some spots of grass that were not properly mowed after using a lawnmower. This instrument was used to mow acres of lawns in the 1700s, truly backbreaking.

This is why lawns were only for the wealthy, as they would necessitate an army of servants to complete the task with shears.

They used to hold the shear by the handle to parallel the cutting blades to the ground. Squeezing the handle to get the blades to cut the grass. Shears were sluggish and time-consuming, but the instrument maintained their lawn beautifully for those who employed servants.

In the 1700s, one of the cheapest methods for mowing lawns was to enlist the assistance of friendly farm animals. True, humans utilized cows to do the work for them.

It took a lot of patience to wait for the herbivore to finish the job, and for vast lawns, a lot of animals were required, and it was not guaranteed that they would eat all of the grass, leaving your lawn manicured; on the other hand, herbivores did the job without leaving any chopped residues.

Using this method was an environmentally friendly way to get your grass groomed.

This ancient tool, which is still largely used for harvesting, was used to cut lawns in the 1700s. It resembles a scythe but has a shorter handle.

During mowing, the sickle was used in a short sweeping motion, and it was appropriately sharpened to make it more effective and faster while mowing.

If you want to try this tool, you can acquire one and use it in the event that your mechanical mower breaks down. To this day, a sickle remains a useful farm implement. 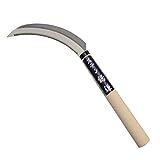 How did people cut grass before lawnmowers?

Lawns were only for the wealthy before lawnmowers because they could maintain them with an army of servants who used manual instruments like the sickle and shears to mow the grass.

How did ancient people mow?

The most effective approach before the lawnmower was the employment of the scythe, which brought some comfort to the ancient people because it was mowed in an upright position. Skilled old-timers would utilize the scythe to cut lawns faster during those golden ages.

Who invented the lawnmower?

Edwin Beard Budding overcame the hard task of mowing with hand tools. In 1830, he created the first lawnmower in England. The mower was propelled from behind and was 19 inches broad, built of wrought iron.

Is it bad to mow the lawn twice a week?

This is largely dependent on the time of year and the type of grass on your lawn. Bluegrass, for example, should be trimmed twice a week in the fall and once a week in the summer. Otherwise, there is no standard for how frequently you should mow your grass.

Having a well-cut lawn was a status symbol, and it was solely regarded as an obsession for the wealthy. Lawns at the time required a labor-intensive manner of maintenance. Today, all honor the brilliant geniuses who made it possible for even the middle class to have a lawn.

It’s hard to believe that lawns began as a source of pride. However, given the cost of having them kempt, I now believe. The tremendous advancement in technology has made mowing lawns faster and cheaper by simply pushing or perhaps having robots perform the chore for us, who knows?

So, if you’ve ever wondered how did they mow lawns in the 1700s, you now know!

Hi, I’m Ricky. I’ve been involved in lawn care and landscaping from when I was 15. To be honest, I didn’t like the idea of pushing mowers, collecting grass clippings, and maintaining flowerbeds at the time. But having seem the passion my parents had for gardening and outdoors and the effort they put in maintaining the health and beauty of our landscape, I couldn’t help but not only admire their hard work but also I became a part of it. As someone who loves to spend time with nature’s best, I find myself learning a lot more about gardening and outdoors on a daily basis. Not to mention I love to share the knowledge I’ve gathered over the years with my readers at We Mow Dallas. To be clear, I don’t have a Master’s degree in gardening or anything like that. Everything I’ve learned about gardening, landscaping, and lawn care spring from passion and engagement with my parents. And with a ton of free information out there, plus the ability to run tests and determine what works best for lawn care and landscaping, every day is an opportunity to learn and implement something new. My goal with We Mow Dallas is to teach you exactly how to maintain your lawn and landscape. And since I walk the talk in reality, you shouldn’t hesitate to join me in this wonderful world of landscaping and lawn care.

Scroll to Top
We use cookies to ensure that we give you the best experience on our website. If you continue to use this site we will assume that you are happy with it.Ok